Two months following the Town of Oyster Bay election, town officials have been sworn in for the start of their new terms. While a few familiar faces are back, such as Supervisor Joseph Saladino and Councilman Steve Labriola, there are also a couple of new names that residents will have to get to know. We sat down with four of them as they get set to serve the community.

Councilwoman Vicki Walsh
Walsh is a 20-year East Norwich resident and a mother of three, who has been very active in her community, having served as the president of her local elementary school PTA and also served on the PTSA and PTA Council Board at her local high school. When it came time to depart these associations, some people approached her about running for government.
“They wanted some representation from the north shore,” said Walsh. “I said no a few times. I didn’t think I had any background at all. But after sitting down with residents, it made sense for me to do this. I could now connect with not just local community groups, but also the whole town.”
Walsh received 31,881 votes and was elected after her nine-month campaign. Taking office this week, Walsh plans to have her main focus be on the town’s financial situation.
“The most important issue right now is holding the line on taxes,” said Walsh. “By doing that, we want to maintain and manage our spending. Part of that is delivering an honest government, sharing resources within the town and being efficient with that.”

Councilwoman Laura Maier
Maier is a businesswoman who owns the Dairy Queen in Massapequa and Jersey Mike’s Subs in Farmingdale and Massapequa Park. She has been heavily involved in the community, from the Massapequa Chamber of Commerce to giving back to organizations such as the PTA and the Boy and Girl Scouts. Many people began coming up to her about running for office and, after meeting with former councilman Joseph Pinto, she decided to run.
“We sat down and we went over the job,” said Maier. “I thought ‘this is amazing. I would love to do it.’ For years of giving back to my community, to do something like this at a much larger scale for all of Oyster Bay, it sounded like a dream job.”
After nearly a year on the campaign trail, Maier won her election with 31,696 votes. Now, her priority heading into office is on quality of life issues, especially those that concern local businesses.
“I want to take care of our business owners so that they come into compliance with our codes and to make sure we can create more efficient outreach between our town board, the building department and our businesses,” said Maier. “Town of Oyster Bay is the greatest place to live and I want to make sure we maintain that.”
Both Maier and Walsh will succeed Councilmen Joseph Muscarella and Anthony Macagnone, who each retired at the end of their terms.

Town Clerk Richard LaMarca
LaMarca has previously served as the labor-management relations director for the town and has more than 20 years of Fortune 500 company experience. He grew up in the hamlet of Oyster Bay and after being away for almost two decades, returned to the area, became president of the civic association and serves on many local boards and committees. He decided he wanted to further give back to the community by serving as the town clerk.
“I felt like it was a natural progression now to be able to [give back] as an elected official,” said LaMarca. “Maybe we can make even more progress in [this role]. I feel like I could do much more now from north to south.”
With 32,363 votes, LaMarca defeated Rachel Klein by a nearly 8,000 vote margin to become the successor to James Altadonna, who did not run for reelection after deciding to run for supervisor. In his new role, LaMarca hopes to make the town clerk’s office more user-friendly.
“I don’t think people should have to take the day off from work, for example, to come down and get a parking sticker,” said LaMarca. “We should put a lot of this stuff online for the community. Maybe we can even set up some sort of unit that could bring the stickers to the residents instead of have them come down to the town hall. I want to make it more convenient for the residents of the town.” 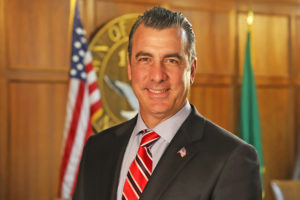 Receiver of Taxes Jeffrey Pravato
Pravato joins the town government after serving six years as the Massapequa Park mayor. He also had experience with the Department of Public Works, serving as deputy commissioner starting in 2017. After many years in his mayoral position, he decided to take on being tax receiver.
“I felt with my financial background, I could really be able to help residents in a larger capacity than I could as mayor,” said Pravato. “I was looking to do more improvements at the receiver’s office and there were a lot of things I was looking to do that I see other receivers’ offices do that the current office wasn’t doing.”
He garnered up 33,105 votes, beating George Hignell by nearly 10,000, and replaces retiring receiver James Stefanich. Pravato’s first action is to extend hours in the last two days of tax collection, as well as make paying taxes more accessible for those who live near Town Hall South in Massapequa.
“Town Hall North is currently the only place you can pay your taxes with cash or credit card,” said Pravato. “I want to make sure they can pay cash down at Town Hall South and you can do credit and debit card also. You can’t even run [a check] through the [Snopex] machines to make sure that it gets put through the system. So what we want to do is put the machines down there so checks can be posted and it can kick out any rejections.”

Keeping Kosher For Its Customers